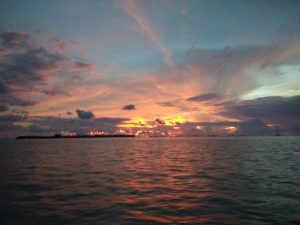 I have been afraid of sharks my whole life. Even in the pool when I was a little kid I remember being afraid if I could not see the entire pool at all times.

Yes, I was afraid of sharks. In pools.

I still get extremely nervous in the water if the visibility is bad. Almost claustrophobic. I always assumed this was because there just might be a big old scary fish down there. So you can imagine my surprise at my reaction to  actually running into a few the other day.

I have taken a “job” crewing for a wonderful, charming, funny man, who thinks the sun shines out my butt, named Albert. I bunny ears the word job because I would TOTALLY do this for free.

I’m learning to be a better sailer every time I go out, I have so much fun out there and I usually eat fresh fish when I come back in. It’s all very win, win, win for me.

The first time we went out with a group we sailed to the reef at Cattrell. I jumped in the water with Saunders, the cute, funny, happy dude, with the great teeth that also crews for Albert.

There were a thousand sting rays. They were everywhere. Big suckers, flying in circles or wiggling themselves into the sand. There were schools of gigantic crabby looking Tarpon. There were beautiful fish everywhere. This was by far the best snorkeling of my life thus far. We swam for what felt like hours.

Saunders was spearing fish. Something I had hoped to learn (which will surprise a lot of people) so that I can feed my family this way. He gave me the spear and pointed out fish after fish that were of legal size and ugly enough for me to kill.

I could not hit anything. They all happily kept on swimming as I speared the rocks or the reef or once, Saunders. Then, watching me get frustrated and wanting me to succeed, he said, “go for the angel fish.” Never imagining that I would hit it as I hadn’t hit anything yet, I pulled the spear back and let it rip. Right through the face of that big beautiful fish. Angel fish aren’t fish you eat. We used his sad, wasted body as chum later. I will carry this guilt forever and have a twang of pain everytime I see an angel fish for the rest of my life.

Saunders tried to get a lobster and succeeded in getting it out of its hole when a nurse shark hip-checked him out of the way and stole it. It was no more then five feet from me. When I saw the shark I felt no fear whatsoever, it was beautiful. Graceful and velvety looking. If anything, I wanted to hug it. Although the next week when a rouge wave lifted me up and plopped me right on top of a huge nurse shark I did actively NOT hug it.

Our friend Victor, Albert’s captain, was catching lobsters as well. A nurse shark tugged on his lobster bag trying to get at those he had caught until Victor poked him in the face with the spear a couple times.

A little later we ran into a bull shark. Maybe five feet long. Saunders pointed it out to me and to his surprise and mine, I chased it. I wanted to get closer, to see it better. Subsequently he informed me that I should not do this again.

When we were done swimming they threw in a block of chum so the family could see more sharks. Victor was using Saunders’s brand new pole spear to break up the chum block when he dropped the spear and it sank to the bottom. At the same time the boat swung around in the wind so we weren’t exactly sure where it had dropped. Victor and Saunders jumped in to get it but couldn’t find it. Eventually I jumped in to help. The chum was so thick around the boat I could taste it. I was swimming through old, dead, ground up, putrefying fish parts. It was horrific. And the smell…. oh the smell. Even though I immediately washed my hair as best I could when I got back it would smell like dead fish every time it got wet for a week after.

We were well aware of the fact that sharks were nearby, that they were headed our way and that technically we now WERE chum. But the boys wouldn’t give up. Saunders really wanted to get his new spear back. Those suckers aren’t cheap.

A huge eight foot bull shark swam through our group. About then I spotted the spear. I swam down as fast as I could, not even stopping to pressurize my ears because I didn’t want to lose it. My head hurt for hours after that.

We watched an epic sunset sailed back home and went out for beers.

Not once was I afraid. They never looked at me. Nothing down there was interested in me in the slightest! Which of course made me want to chase and pet and be friends with everything. I still get nervous if I can’t see more then fifteen feet but when visibility is good I am fearless.

This is good news.

As this is my life now.